Siena’s surroundings offer many opportunities for travelers who have always dreamed of exploring the most enchanting spots in Tuscany.
In fact, this land of plenty is suitable for tailored itineraries, including one-day tours to take full advantage of a stay in Siena.

In this post we recommend Chiusdino, a hamlet located in Val di Merse, known especially for the proximity to the legendary Abbey of San Galgano, which we suggested in the article
Val di Merse, a route through villages, hills and abbeys.

Chiusdino is only 30 km far from Siena and rises on the Colline Metallifere, hills characterized by the presence of deposits of ferrous minerals.
The name of the hamlet comes from the Latin word Cluslinum, that indicated the castles and fortresses located in this part of Tuscany.

The foundation of the hamlet, presumably, dates back to the Longobard domination in Tuscany, around 572. For this reason Chiusdino has long been a small hamlet enclosed in the walls, of which remains are still visible today. Before going to the Cistercian abbey, we suggest visiting the church of San Michele Arcangelo, which is just close the San Galgano birthplace.
The most recent restoration enhanced the original charm of this church, where you can admire two paintings by Alessandro Casolani, dating to the XVI – XVII century, and the relic containing the head of San Galgano. Credits :By LigaDue (Own work) [GFDL (http://www.gnu.org/copyleft/fdl.html) or CC BY 3.0 (http://creativecommons.org/licenses/by/3.0)], via Wikimedia Commons

The sword in the stone, in Tuscany 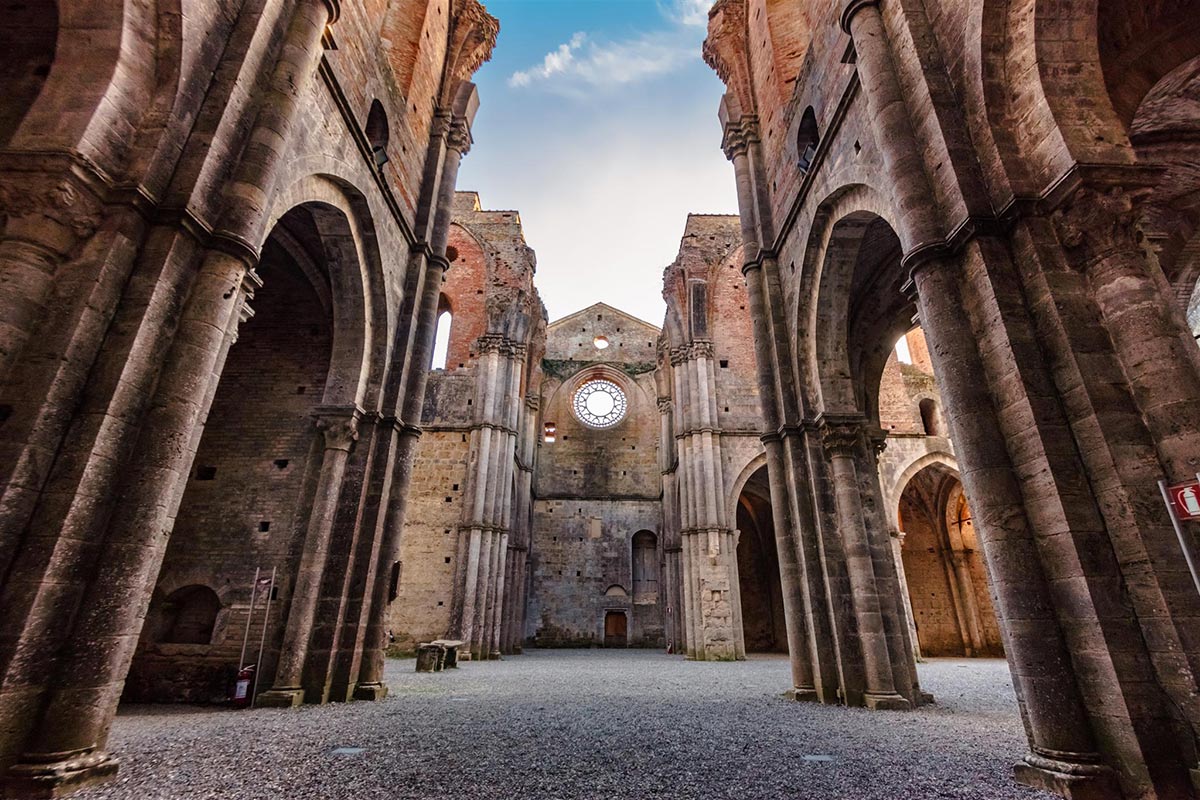 The Cistercian abbey, outside the hamlet of Chiusdino, also includes the Montesiepi Hermitage and is one of the most popular tourist destinations in Tuscany due to the legend of the “sword in the stone”.

This was originated from the conversion of the knight Galgano Guidotti, who, after a lively youth, retired to a hermitic life.
According to the legend, Galgano converted to Christianity on 25th December 1180 when he came to the Montesiepi hill and thrust his sword into a stone in order to turn the weapon into a cross.

For this reason today, within the Hermitage, there is a display case that protects the stone with the sword, a striking affinity with the myth of King Arthur.

The abbey is also a place that leaves without words: built in the XIII century, was abandoned during XVI century and began to ruin until it collapsed in several parts.
In 1924, it was decided to consolidate what remained and therefore not reconstruct the ceiling and the floor.

The abbey is also one of the most important examples of Gothic-Cistercian architecture in Italy. For further information, please visit confraternita-sangalgano.it/wp/labbazia-di-san-galgano/.

Previous Article
Film Festival in Siena: guide to the movies and the events
Next Article
The most delicious dishes of Sienese tradition